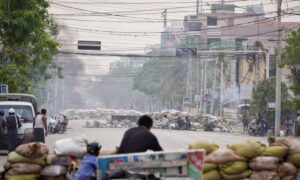 According to domestic media, a Burmese national army alliance against the military junta crackdown on anti-coup protests attacked an eastern police station on Saturday, killing at least 10 police officers.

The Naung Mon police station in Shan State was attacked early in the morning by fighters from alliances, including the Arakan Army, the Ta’ang National Liberation Army, and the Myanmar National Democratic Alliance Army, the media reported.

A military junta spokesman did not return a call for comment.

More than 600 people were killed by the military in a crackdown on a protest against a coup on February 1, according to surveillance groups. As the violence escalated, about twelve armed groups accused military junta of being illegal and vowed to stand with protesters.

Civilian lawmakers, mostly hiding after the expulsion, have announced plans to form a “national unity government” that plays an important role as a national leader, discussing joint resistance to military junta online.