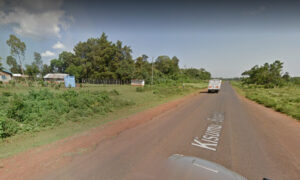 Residents began sucking fuel from the tanker after the tanker collided with a trailer near the village of Maranga in Siaya county late Saturday, according to Gemsub County police commander Charles Chacha.

“A trailer carrying 20 tonnes of milk hit a fuel tanker heading for Busia,” he said.

“The tanker collided with the vehicle at the rear right. As a result of the impact, it capsized at the left end of the road,” he said.

He said the public rushed to the crash site to suck up fuel.

“After a while, the fuel tanker went up in flames,” he said.

Many Kenyans continue to smoke because they are suffering from poverty, despite authorities warning about the dangers of sucking after hundreds of people have died in previous incidents.

In 2009, at least 120 people died after a large crowd fell on a fallen petrol tank truck. However, families suffering from poverty say they have few options. Soaring food and fuel prices mean that many cannot feed their children.