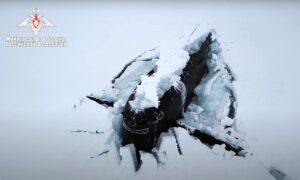 Three Russian nuclear ballistic missile submarines have surfaced simultaneously breaking the Arctic ice during drills, reported the commander-in-chief of the Russian fleet at a meeting with President Vladimir Putin via videolink on Friday.

The commander, Nikolai Yevmenov, said the sophisticated maneuver was carried out by submarines “for the first time in the history of the Russian Navy”. The submarines surfaced within a 300 meters radius and the ice they broke was 1.5 meter deep, the admiral added.

Russia has prioritized beefing up its military presence in the Arctic region, which is believed to hold up to one-quarter of the Earth’s undiscovered oil and gas. Putin in the past has cited estimates that put the value of Arctic mineral riches at $30 trillion.

Russia, the United States, Canada, Denmark and Norway all have been trying to assert jurisdiction over parts of the Arctic, as shrinking polar ice opens new opportunities for tapping resources and opening new shipping lanes.

As part of its efforts to project its power over the Arctic, the Russian military has rebuilt and expanded numerous facilities across the polar region in recent years, revamping runways and deploying additional surveillance and air defense assets.

The Russian defense ministry published footage of the submarines emerging from underneath the ice with loud noise.

As part of this week’s maneuvers, a pair of MiG-31 fighters flew over the North Pole, Yevmenov said. A Defense Ministry video featured them being refueled by a tanker plane.

The drill was held near Franz Josef Land Archipelago in the Arctic Ocean and was aimed at testing Russian military hardware in extreme weather conditions.

The Associated Press contributed to this report