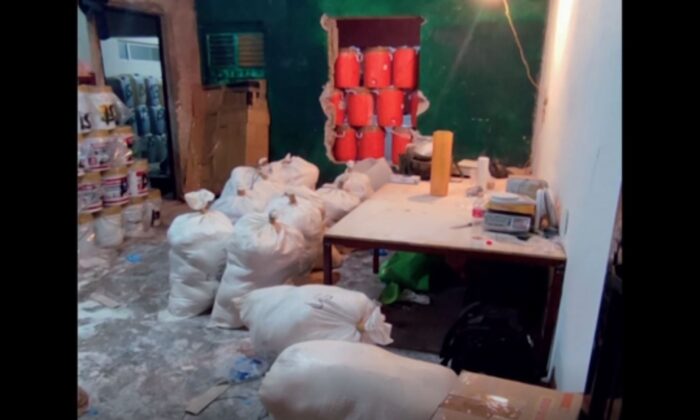 Bags and materials used to produce methamphetamine on January 27, 2022 in the northwestern part of Sinaloa, a town near Culiacan, the capital of Mexico. (Screenshot via AP / Epoch Times)

The Army, National Guard, and federal prosecutors in Mexico have seized more than 5.8 tons of methamphetamine in Sinaloa. This is the largest seizure of this drug by the current administration, which began in December 2018.

The seizure occurred on January 27, two days ago, in northwestern Sinaloa near the capital, Culiacan, according to a statement from the Ministry of Defense on Saturday.

The photo, released with Saturday’s statement, shows a pile of materials used to make the drug.

More than 2.4 tons was liquid methamphetamine, but when crystallized, it becomes slightly lighter to about 2 tons.

Culiacan is the main processing base for synthetic drugs containing fentanyl, which is then distributed northward and eventually ends up primarily in the United States.

The Sinaloa Cartel, whose leader Joaquín Guzman is sentenced to life imprisonment in a US prison, dominates the state.