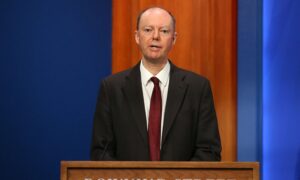 The Metropolitan Police Department said Friday that one of the men who harassed Britain’s chief medical officer Chris Whitty on Sunday was indicted.

A man, 23-year-old Lewis Hughes, was charged with a general assault on Thursday night. The Metropolitan Museum of Art said Hughes was charged with a postal request and will appear in the Westminster Magistrates’ Court on July 30.

The Metropolitan Museum of Art also said investigations into the case were ongoing.

Video Starting Sunday at St. James’s Park in London, which is distributed online, Hughes and his friend Jonaton Chu are ridiculing to grab Whitty, who appears to be struggling to free himself. Is shown.

At one point, I hear one of them say, “Please give me one?”

The Metropolitan Museum of Art had previously stated that a nearby police officer had intervened when he saw the incident, and the man was “severely warned of their actions and ordered to leave the area.”

Whitti was not injured and told police officers on the scene that he did not want to file a complaint before leaving.

Hughes then apologized for his actions, saying he had a drink before the incident, and just wanted to take a selfie with the chief medical officer and show it to his mother.

“It wasn’t malicious. I didn’t want to upset him,” Hughes said. Sun newspaper.

A former realtor also said he lost his job after the video spread by word of mouth, causing widespread criticism, including the prime minister, who called the two men “thugs.”

However, according to Sun, his friend Jonaton Chu also appeared in the video, but with little repentance.

His friend Chu, who suffers from autism and ADHD, told the newspaper that he didn’t think they had done anything wrong.

Whitty’s allegedly harassed footage has appeared on social media for the third time and has been asked if he needs to be assigned personal protection.

Simon Veazey contributed to this report.