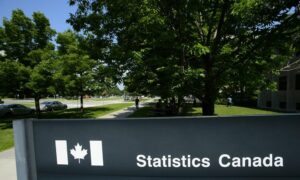 Ottawa — According to Statistics Canada, the economy grew at an annual rate of 5.6% in the first quarter of this year.

The economic boost was helped by deregulation of public health regulations, which helped increase the production and service sector.

According to the Statistics Bureau, the quarter ended with a 1.1% increase in real gross domestic product in March, following the 0.4% registered in February.

Construction expanded for the third consecutive quarter with the construction and remodeling of single-family homes as Canadians sought to improve their homes and find more space.

Statistics Canada states that public sector production contributed most to the growth services production industry in the first quarter, including healthcare.

At the end of the quarter, Statistics Canada says overall economic activity was 1 percent below the level seen before the February 2020 pandemic.

Statistics Canada also estimates that the second quarter began with a stumbling block and economic output fell 0.8% in April. This is the first decline since April 2020.

The agency says the April decline will leave overall economic activity about 2 percent below the pre-pandemic level in February 2020.

CIBC Chief Economist Avery Schenfeld wrote that investors have already passed the rest of the second quarter and hope that vaccination will pave the way for strong growth in the second half of this year.