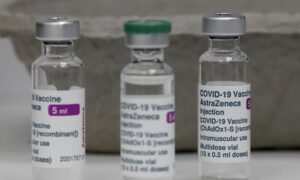 The European Union’s drug regulator announced March 18 that the AstraZeneca CCP virus vaccine is “safe and effective” following reports of recipients developing blood clots or even dying after getting the shot.

The European Medicines Agency, in essentially clearing the vaccine for usage, said the Oxford-AstraZeneca shot isn’t associated with an increase in the overall risk of developing blood clots, and the benefits of using the vaccine continue to outweigh its possible risks.

“There is no evidence of a problem related to specific batches of the vaccine or to particular manufacturing sites,” the agency said in a statement. “However, the vaccine may be associated with very rare cases of blood clots associated with thrombocytopenia, i.e. low levels of blood platelets (elements in the blood that help it to clot) with or without bleeding, including rare cases of clots in the vessels draining blood from the brain (CVST).

“The number of reported events exceeds those expected, and causality although not confirmed, cannot therefore be excluded. However, given the rarity of the events, and the difficulty of establishing baseline incidence since COVID-19 itself is resulting in hospitalizations with thromboembolic complications, the strength of any association is uncertain.”

In a separate news briefing on March 18, the World Health Organization Regional Director for Europe, Hans Kluge, called on EU countries to use the vaccine for now.

“As of now, we do not know whether some or all of the conditions have been caused by the vaccine or by other coincidental factors,” Kluge said. “At this point in time, however, the benefits of the AstraZeneca vaccine far outweigh its risks—and its use should continue to save lives.”

The announcement came after Spain, Germany, Italy, France, and Sweden joined a list of countries to suspend using the AstraZeneca shot. In Italy, a local prosecutor in the Piedmont region said a criminal manslaughter probe would be opened into the death of a 57-year-old music teacher who reportedly died hours after receiving the shot, while prosecutors said they seized about 400,000 doses of the vaccine.

Before that, a 60-year-old Danish woman died after developing what Danish health officials described as “unusual symptoms,” prompting Denmark to suspend usage of the vaccine.

Some European nations such as Greece and Belgium have continued using the vaccine. Australia, Canada, and India have also continued to use it. The vaccine has not yet been approved for use in the United States by health regulators.

The United Kingdom, where AstraZeneca developed the vaccine, has criticized EU countries for suspending usage, with some officials saying the move may have been political in nature.

The AstraZeneca shot is the world’s most widely used COVID-19 vaccine.