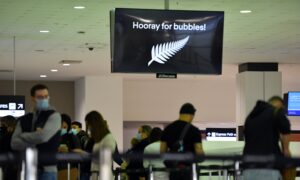 Australia has granted more than 150,000 travel exemptions to those leaving the country during the outbound travel ban period caused by the CCP virus.

As the virus spread around the world, the Australian Government closed its borders in March 2020, allowing only those in exceptional circumstances to enter the country. Apply for exemption..

Reasons for exemption include “compassionate and compelling reasons”, work and study, and travel to provide support for a pandemic abroad.

However, considering that one person can apply multiple times, the above figures do not necessarily represent the number of exemptions.

News of the amount of Australian travel abroad came after a federal court dismissed a proceeding filed by a Libertarian think tank to challenge the federal government’s ability to impose a travel ban on the general public.

Australia is the only western democracy to impose an international travel ban on citizens and permanent residents.

Andrew Cooper, president of LibertyWorks, told The Associated Press that the group was very disappointed with the decision and believed it violated the human rights of Australians.

“We are very disappointed with today’s ruling. We continue to believe that border closures are flawed in law and, perhaps more importantly, unjustified for human rights reasons.”

“Europe and most countries in the world have opened their borders, but only North Korea and Australia continue to tightly control the capacity of citizens to leave their country,” he said.