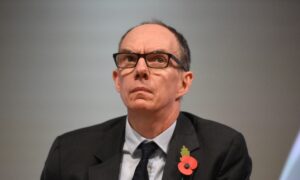 London — Bank of England could tighten control over cloud data providers and other tech companies to counter the potential risks to financial system stability due to the rise of FinTech, said David Bramsden. The governor said.

The Bank of England (BoE) has previously expressed concern that financial companies, especially FinTech start-ups, rely on third-party tech companies for a major part of their operations, and Lumsden has stepped up this scrutiny. Said.

At the Innovate Finance Conference Wednesday, Lumsden said, “We will further analyze whether more powerful tools are needed to manage the risks that key third parties, including the cloud and other major technology providers, pose to the World Bank’s goals. I plan to do it. “

Regulators around the world are increasing their oversight of outsourcing capabilities as regulators are concerned that the core services financial companies provide to their customers are vulnerable to third-party outages.

The UK government is keen to promote FinTech as a growth area so that light regulation can steal the march over the European Union, where Brexit has restricted access for UK financial companies. I hope to be

The BoE says it will not undermine regulatory standards, but sees room for more streamlined regulation in some areas of small banks and insurance.

On Monday, Treasury Minister Rishi Sunak asked the Bank of Finance to work with the Treasury on whether the central bank should set up a digital version of the pound sterling to compete with a cryptocurrency called “Britcoin.”

The government is also discussing proposals to relax stock market listing rules, especially because of concerns that the UK is less attractive as a listing location than the United States, especially for tech companies whose founders want to retain a significant role.

Lumsden said the BoE will ease the lives of small financial companies on Monday by providing companies with a more direct way to access high-value payment systems dominated by large banks and processing companies. He said he had taken a step.

Other steps included standardizing the identification of companies involved in financial transactions and investigating whether artificial intelligence could reduce the burden of regulatory compliance.

By David Milliken and William Schomberg