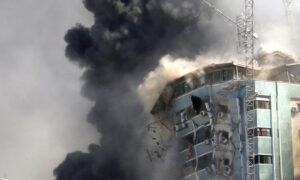 Secretary of State Antony Blinken has so far found evidence to support the Israeli government’s claim that a Hamas terrorist group is operating in the Gaza building, which houses the Associated Press and other media, on May 17. Said not.

Israeli airstrikes knocked down a building known as the Jara Tower on Saturday. It was used by Hamas, according to top Israeli leaders.

Other media organizations, such as Qatar-backed media outlet Al Jazeera, also existed within the tower.

Blinken spoke at a press conference in Copenhagen, Denmark, saying he was unaware of evidence that Hamas was operating inside the building and sought justification from Israel.

“I requested additional details about its legitimacy shortly after the strike,” Blinken said at the meeting, refusing to talk about certain information: Associated Press..

“It’s up to others to characterize whether the information is shared and evaluate it,” Blinken said.

“I have never seen the information provided,” he said.

The day before, the Associated Press editor requested an independent investigation into the airstrikes.

The Secretary of State spoke with APCEO Gary Pluit on Saturday after the building was destroyed. According to spokesman Nedprice, Blinken “provided unwavering support to independent journalists and media organizations around the world and pointed out the imperative of coverage in conflict zones. He pointed to the Associated Press on the ground in Gaza. He expressed his reassurance that the team remained safe. “

Israeli military spokesman Lieutenant Colonel Jonathan Conricus said he was organizing US evidence and refused to promise a US presentation in the next two days.

“We are in the middle of a fight. It is in progress and we are confident that information will be presented someday,” he said on Sunday.

During the weekend, the Associated Press denied knowledge of terrorist groups operating in the building.

Pluit said he didn’t know Hamas was in the tower. That is, they “are actively checking to maximize our capabilities. We never deliberately endanger journalists.”

Pluit issued a statement that it was “warned that the building would be hit.”

AP said employees and freelancers had evacuated before the building was shot down.

The Israeli Defense Forces (IDF) told local media that Hamas’ “military assets” were hidden in the building and accused the building of AP, Al Jazeera, and other media for using it as a “human shield.”

The IDF claimed that “the Hamas terrorist group intentionally placed its military assets in the center of the citizens of the Gaza Strip.”

Israeli Prime Minister Benjamin Netanyahu said he would provide evidence through an information channel that Hamas is in the 12-story Jara Tower.

The Associated Press editor-in-chief, Sally Buzbee, said their organization had been operating in the building for 15 years and had never seen any signs that a terrorist group could be there.

“We are in a conflict situation,” she said. “We disagree with the conflict. I heard the Israelites say there is evidence. I don’t know what the evidence is.”

“At this point, I think it’s appropriate to investigate what happened yesterday independently. It’s an independent investigation,” Buzbee added.

In addition, Blinken said on Monday that the United States is working “intensively” to end the conflict in the Middle East, denying the idea that Washington is blocking diplomacy at the United Nations.

Blinken also called on Hamas to end the rocket attack.

“There is no equality between a terrorist group that indiscriminately launches rockets at civilians and a country that protects its people from those attacks, so we call on other groups in Hamas and Gaza to end the rocket attack immediately. “I will.” Blinken said.