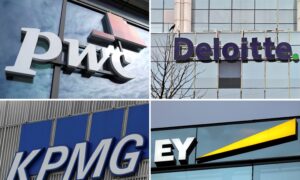 LONDON—Britain proposed weakening the market grip of “Big Four” auditors on Thursday and making company directors responsible for spotting fraud after the collapses of retailer BHS and builder Carillion.

Directors would have to repay bonuses if their company went bust or serious failings came to light, and dividends and bonuses would have to be stopped if firms didn’t have enough cash—a lesson from the Carillion collapse.

The long-awaited proposals, put out to a four-month public consultation, implement the bulk of recommendations made in three government-backed reports on audit market competition, regulation, and corporate governance.

“It’s clear from large-scale collapses like Thomas Cook, Carillion, and BHS that Britain’s audit regime needs to be modernised with a package of sensible, proportionate reforms,” business minister Kwasi Kwarteng said in a statement.

Some of the proposals are already being introduced in voluntary form, such as operational separation of audit and more lucrative consultancy work at PwC, Deloitte, KPMG, and EY—the “Big Four” firms that dominate auditing of blue-chip UK companies.

The Financial Reporting Council, criticised by lawmakers for being too timid in regulating auditors, is already undergoing an internal transformation to become the more powerful Audit, Reporting and Governance Authority, or ARGA, proposed on Thursday.

The government proposed that smaller audit firms undertake a meaningful portion of a big company audit, stopping short of the joint audit initially recommended by the UK Competition and Markets Authority.

This would help “challengers” like Mazars, Grant Thornton, and BDO build up expertise to fully take on the Big Four later on. If this competition strategy fails, the Big Four face caps on market share, the government said.

Mazars said targets of at least 20 percent of total audit fees at challenger auditors for FTSE-350 companies after five years of reform should be set.

New reporting obligations would be introduced on both auditors and directors around detecting and preventing fraud.

Company boards would be required to set out what controls they have in place in a British version of the stringent U.S. Sarbanes-Oxley anti-fraud safeguards introduced after energy giant Enron collapsed.

ARGA would have powers to investigate and punish all company directors.

The Institute of Directors said it was appropriate to consider how accountability of directors could be improved, but the collective responsibility of a board should remain the central feature of UK corporate governance.

After the consultation ends in July, the government said it would propose legislation when “parliamentary time allows”.

“We urge ministers to get on with implementation as quickly as possible, with the establishment of the new regulator as the top priority,” said Michael Izza, CEO of the ICAEW, a professional accounting body.