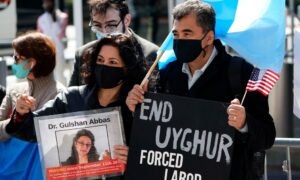 Canada has announced sanctions against four officials and one entity in China “based on their participation in gross and systematic human rights violations” against Uyghur Muslims in the Xinjiang Uyghur Autonomous Region (XUAR).

Global Affairs Canada said Monday that the measures, effective March 22, are being taken in co-ordination with the United States and the United Kingdom, and in solidarity with the European Union.

The listed individuals and entity are be subjected to an assets freeze, and Canadians and residents in Canada are banned from “engaging in any activity related to any property of these individuals or providing financial or related services to them.”

The names of the sanctioned individuals and entity are:

Global Affairs noted that the state-directed campaign has resulted in the systemic and arbitrary detention of more than a million Uyghurs and other ethnic Muslims in Xinjiang.

“We remain deeply concerned by the egregious human rights violations that are taking place in Xinjiang at the hands of the Chinese state,” Foreign Affairs Minister Marc Garneau said in a press release.

“Today, we are joining our partners in calling on the Government of China to put an end to this systematic campaign of repression against Uyghurs and other Muslim ethnic minorities and to hold those responsible to account.”

China’s massive campaign against the Uyghurs—including political reeducation, forced labour, torture, and forced sterilization—on the basis of their religion and ethnicity has been recognized as an act of genocide by a growing number of countries.

“Canada has raised the issue with Chinese authorities, and consistently voiced its deep concern over the repression of minorities in international forums in co-operation with partners, including at the United Nations Human Rights Council,” the release said.

On Jan. 12, Canada and the U.K. together announced a set of measures related to the human rights situation in the Xinjiang that prevent the risk of goods produced by forced labour from any country from entering Canadian and global supply chains, and to protect Canadian businesses from becoming unknowingly complicit.