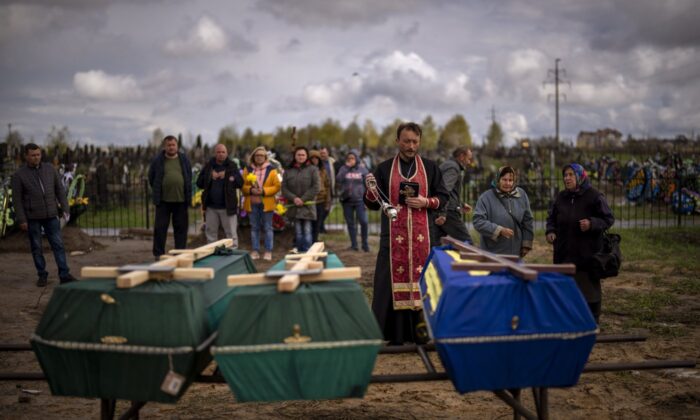 A priest blesses the bodies of three people who died during the Russian occupation and were transported from a temporary burial site in Bucha, a suburb of Kyiv, on April 27, 2022. (AP/Emilio Morenatti)

The Canadian government has imposed sanctions on dozens of Russian military officers accused of committing atrocities against Ukrainian civilians.

Canada has also added 17 Russian companies and entities to its sanctions list for helping to invade Ukraine.

Most of those added to the list are Russian military officers who were sanctioned by the European Union in June for their troops’ actions in Bucha.

Russian forces have been accused of raping, torturing and killing hundreds of Ukrainians in cities outside Kyiv during the first months of the invasion.

The International Criminal Court is investigating alleged war crimes and crimes against humanity committed by Russian troops withdrawing from the region in March.