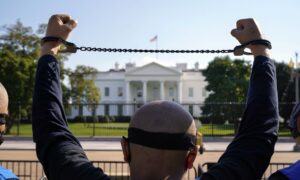 In a rare piece of good news on the Canadian foreign policy front, the government has finally taken action that is consistent with its frequently professed enthusiasm for strong multilateralism. Canada, in co-ordination with the United States and the United Kingdom, has decided to impose sanctions on some of the Chinese officials responsible for the ongoing genocide being perpetrated against Uyghur Muslims in the Xinjiang Uyghur Autonomous Region.

Though still naively insisting that the Chinese regime allow “meaningful, unfettered access to the XUAR so that impartial experts can observe and report on the situation first-hand,” the statement from Global Affairs says the government will work “collaboratively with partners to address the dire human rights situation in Xinjiang, including by ensuring consequences for this repression, with a view to ending it.”

This is a genuinely encouraging development, especially as the constant calls for effective multilateralism by government officials have been mostly performative. Members of government have often lamented multilateralism’s decline in recent years, which usually has come in the form of subtle or direct jabs at the ambivalence of America. They have made these pronouncements while often doing nothing constructive to help reinvigorate these alliances and help fill whatever gaps Washington has been accused of leaving. On the question of China particularly, Canada has made itself out to be an irresolute friend. Indeed, its foreign policy has often been a masterclass in how to undermine one’s credibility among both friends and foes.

Notwithstanding the optimism the move to impose sanctions may generate, there is still the broader concern of Ottawa’s lack of any clear, effective strategy on China and the dire need for one. The government’s co-operation on the sanctions is laudatory but is also a direct result of continued pressure put on it by allies and political opposition at home, with parliamentarians from all parties voting unanimously last month to declare the Chinese Communist Party’s treatment of the Uyghurs a genocide.

But aside from these specific sanctions and the accompanying rhetoric, the government—even with Parliament’s acknowledgement of genocide—has yet to present a new strategic vision for China that seriously considers the nature of the CCP, its ambitions, and the resultant epochal challenge it poses to the international order. As of this juncture, Ottawa still clings to the overly accommodationist approach which has gotten us into the many imbroglios in which we find ourselves with China.

The recent show trials of Michael Kovrig and Michael Spavor demonstrate a spectacle that illustrates a clear picture of both the menace of the Chinese regime and the consequence of Ottawa’s passivity. In yet another plain display of its character and, indeed, the farcical character of the two Michaels’ detainment on the charge of “espionage,” the CCP denied officials from Canada and allied countries access to the court proceedings. Such access would have obviously helped provide insight into the legitimacy of the process and assess the evidence mounted against the accused, which would have of course led to the process being exposed further as the grotesque political charade it is.

In response, the PM and Foreign Minister Marc Garneau have both condemned the lack of transparency around the trials, with Garneau issuing a statement saying the government is “deeply troubled” and that it continues to work to bring an “immediate end to their arbitrary detention.” Nothing in this and other pronouncements on the subject has alluded to any strategy they are pursuing or the leverage they might be exploring to help bring this about.

These are the fruits of a failure to think strategically and consider contingencies that might arise in a volatile international landscape. The relationship with China has been construed almost entirely through the narrow lens of economics and other superficial interests, at the expense of crucial things like security and defence.

With a highly influential pro-China business lobby, it’s difficult for some politicians to think outside of this orthodoxy. Those appointed to high-profile positions related to China are often assessed and praised mainly for their business acumen or connection to China, rather than their diplomatic prowess or experience in dealing with complicated regimes and defending Canadian interests on the world stage.

In an interview with the CBC, former U.S. National Security Advisor John Bolton suggested that to respond to the issue of the two Michaels, Canada and its allies should consider sanctions and even threaten possible expulsion of Chinese diplomats from their countries until Kovrig and Spavor are released. He then said the “deeper meaning” of Beijing’s conduct is that it should shed light on the regime with which the West will be forced to contend in the decades to come.

What this challenge requires, then, are people preoccupied with questions of grand strategy and how to formulate one according to Canada’s interests and capabilities, instead of those who look at China only with their business bottom line in mind.

Hal Brands, an American historian at the Washington-based American Enterprise Institute, has argued that strategy toward China should be rooted in what he calls a “regime realism” that acknowledges both the nature of power and anarchy in international competition and how the ideology of a regime informs China’s actions in the international arena.

Moreover, he argues that China’s actions are in part driven naturally by its position as a rising power in an increasingly anarchic world. The problem is what it seeks to ultimately achieve with its power. Though Brands says China may differ from the Soviet Union somewhat in terms of its commitment to spread its ideology, it has a desire to “build a global order in which authoritarian forms of government are protected and even privileged.” This can be witnessed in the partners it chooses, its protection of other authoritarian regimes, stifling criticism at home and abroad, and the promotion of its system in contrast to the democratic West.

He concludes that the United States (and by extension, its allies) will not “cease being a threat to the CCP without ceasing to be what it is—a democracy concerned with the fate of freedom in the world. And China cannot cease being hostile to the US-led international order without ceasing to be what it is—an autocratic regime whose strength masks pervasive insecurity.” (It should be noted that this is not to advocate for a high-risk regime change policy. Rather, it is just to elucidate the roots of the conflict.)

The reality is that this conflict with the CCP is one of systems, which inevitably makes it one about values. This is what gives it its potential protractedness.

Canada, given its position and stature, will debate the various intricacies of how to manage the China problem on its own terms, and policymakers shouldn’t feel as if they have to march in lockstep with whatever Washington does. But the strategy should at least begin with the broad understanding of the regime type in Beijing and how this will make confrontation unavoidable at certain points.

Shane Miller is a political writer based in London, Ontario.