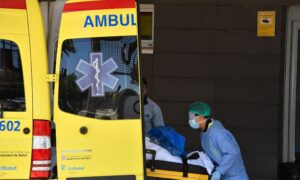 Madrid — Officials in the city of Marbella in southern Spain said they pushed a car onto a sidewalk full of outdoor restaurants on Monday and ruled out terrorism as a motive for drivers who injured at least 10 people.

Most of the injured were found in a local hospital, but police said in a statement that two people, including a seriously injured woman, had to be taken to a larger facility in the state capital, Malaga.

He added that a car driver, a 30-year-old Spanish man, was arrested on the spot.

An online video of a crash site, one of the main roads in a coastal resort city, shows an ambulance and an ambulance while a waiter cleans up and assists people on the ground shortly after a car hits a pedestrian sidewalk. A police officer was in the picture.

The incident occurred in the middle of the afternoon as the area was flooded with lunch customers, according to Raul Morote, a family who owns several restaurants on the popular Miguel Cano Avenue.

“The car was zigzag and wiped everything out,” Morote told The Associated Press.

He said he saw paramedics attending about 12 people, many of whom had their feet covered in blood.

In 2017, a militant Islamic extremist cell drove a group of bystanders in Barcelona and the nearby coastal town of Cambrils to kill 16 people and injure 140 in two consecutive attacks. It was.