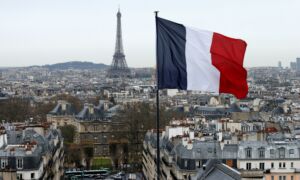 French media revealed on March 15 that China’s ambassador to France, Lu Shaye, pressured a French lawmaker to cancel a planned official visit to Taiwan. In response, Taiwan’s Ministry of Foreign Affairs condemned the move and called out the Chinese regime’s “wolf warrior” diplomacy.

According to French newspaper La Lettre A, Lu learned from the French Senate website that Senator Alain Richard, chairman of France-Taiwan Friendship Group, was planning to lead a parliamentary delegation to visit Taiwan in the summer to learn how the Taiwanese government successfully handled the COVID-19 pandemic.

Lu wrote a letter to Richard on Feb. 18, pressuring him to cancel the trip. Lu reportedly told Richard that Taiwan is an “indivisible part of China,” and his planned visit is a violation of the “one-China principle” and will affect the “status quo” between Beijing and Taipei, the report said.

The Chinese Communist Party (CCP) views Taiwan as part of its territory, despite the fact that Taiwan is a de facto independent country, with its own military, democratically-elected government, and constitution. Beijing has threatened to reunite the island with the mainland with military action.

Since the CCP took over mainland China in 1949, China and Taiwan have had independent forms of government, and the two sides fought several times in the 1950s and 1960s. Since that time, while there hasn’t been an armed confrontation across the strait, the situation hasn’t eased either. Instead, it has deteriorated in recent months.

The CCP has opposed foreign governments’ official visits to Taiwan and pressured nations to sever diplomatic relations with the self-ruled island.

During a press conference in Taipei on March 16, Kendra Chen, the deputy director-general of Taiwan’s Department of European Affairs, said, “The ministry strongly condemns Beijing for its rudeness,” Taiwan media Taipei Times reported. She also said that Beijing’s “wolf warrior” diplomacy is the reason why the tension between Taiwan and China has escalated in recent years.

Taiwan’s foreign minister, Joseph Wu, said on the same day that Beijing’s “wolf warrior” diplomacy is not acceptable to any civilized country that respects the rule of law and stressed that Taiwan welcomes friends from around the world, Hong Kong media The Standard reported.

“Wolf Warrior” is the name of a 2015 Chinese war movie that promotes an aggressive and combative attitude towards the West and enemies of the communist regime. The aggressive style and approach adopted by Chinese diplomats under CCP leader Xi Jinping is described as “wolf warrior” diplomacy.

Taiwan’s premier, Su Tseng-chang, criticized the Chinese regime’s actions: “Beijing’s attempt to block exchanges between Taiwan and France on the coronavirus disease only created a bad impression of China on the international stage,” according to The Standard.

It’s not the first time that the Chinese Embassy in France has caused a diplomatic rift with their “wolf warrior” tactic.

In April 2020, French lawmakers condemned the Chinese Embassy for posting false accusations on its official website with regards to the COVID-19 pandemic and the World Health Organization (WHO). The unnamed diplomat claimed that Taiwan and 80 French lawmakers had cosigned a disparaging statement about WHO Director-General Tedros Adhanom Ghebreyesus and accused him of being pro-China.

The post defended Beijing’s response to the pandemic, while criticizing western countries. The diplomat said that healthcare workers at Western nursing homes abandoned their jobs, leaving the residents to die. The post came just days after France had raised its pandemic death toll, which included victims from nursing homes.

Chinese ambassador Lu was summoned by French Foreign Minister Jean-Yves Le Drian on April 16, 2020 over his inappropriate statements that “are not in line with the quality of the bilateral relationship between our two countries,” according to a statement from the French ministry.