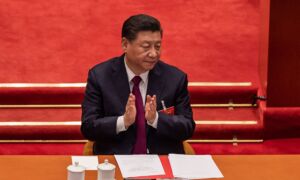 Leader Xi Jinping of China, in a speech made at the annual Boao Forum for Asia, took a jab that was announced in the US on April 20. Given the Communist Party’s attack in Hong Kong’s Xinjiang Uygur Autonomous Region and the lack of good faith in the demand for transparency against the CCP virus pandemic, Xi’s words were quickly scrutinized.

According to an English translation published by Chinese state media Xinhua, Mr. Xi said in a keynote speech at the forum, “If you make someone else your boss or interfere with someone else’s internal affairs, you won’t get any support.” It was. Bo’ao is a Chinese conference equivalent to Davos, which is held annually by the World Economic Forum, a non-profit organization, to promote public-private cooperation.

Many Western governments, including Washington, have criticized the Chinese Communist Party (CCP) for human rights abuses in Xinjiang Uygur Autonomous Region, Hong Kong, and Tibet, and for continued military coercion against Taiwan. However, the communist regime has distracted criticism by insisting that countries should not “interfere” with China’s “domestic affairs.”

Xi’s veiled swipe in Washington didn’t end there. Xi said that in the age of economic globalization, attempts to “build” or “separate” only “do not benefit oneself, but hurt the interests of others.”

The United States has imposed a number of export restrictions on China, including a ban on semiconductors. This has proven to be the most damaging to the Chinese economy, given that Beijing relies heavily on foreign chip purchases. US sanctions have crippled China-based tech giant Huawei’s smartphone business. Chinese chip maker SMIC is also on the trade blacklist.

In March, Congressman Mark Greene (R-Tenn.) Recommended supporting the development of manufacturing bases in Latin America while the United States was separated from China.

Xi added:[W]e must reject the Cold War and zero-sum ideas and oppose the new “Cold War” and any form of ideological conflict. “

Xi’s words about having a Cold War mindset have been used by CCP officials and Chinese state media to attack the US government and its officials.

In a Pentagon article, Esper said: “We are in an era of competition between great powers … and that means that our biggest strategic competitors are China, then Russia.”

“It’s clear that anyone who understands me and China has the ambition to drive us out of the region, preferably on the world stage,” Esper added. ..

Xi’s speech quickly criticized his statement, “What we need in today’s world is justice, not hegemony,” especially on Twitter.

Sally Hudayar, founder of the Washington-based East Turkestan Great Awakening Movement I have written The world needs justice by prosecuting Chinese officials, including Xi, in the International Criminal Court, who “commanded the massacre of #Uyghurs and other Turkic people in the occupied #EastTurkistan.”

The CCP has carried out genocide against Uighurs in the Xinjiang Uighur Autonomous Region, including forced sterilization, forced abortion, torture, forced labor, and the removal of children from their families. In addition, more than one million Uighurs have been detained in the camp. This is a facility that the Communist Party administration defends as a “vocational training center”.

Sreeram Chaulia, Professor and Dean of the Graduate School of International Affairs, OP Jindal Global University, India, I have written The world needs justice from China to cause the COVID-19 pandemic.

COVID-19 is a disease caused by the CCP virus, and the Chinese administration silenced whistleblower doctors, including Li Wenliang, who tried to warn the public about a new form of pneumonia on Chinese social media in late 2019. However, I first tried to hide it.