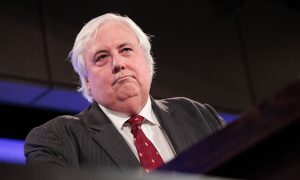 Clive Palmer, a businessman and former politician, was ordered today to pay $ 1.5 million to American heavy metal band Twisted Sister for infringing the copyright on their songs.

Universal Music sued Palmer in February 2019 after using the rewritten lyrics of the 1984 hit.We are not going to take itIs part of the political parody song “Aussies Not Gonna Copit” as part of an ad for the United Australia Party (UAP), a party he founded in 2013 in the 2019 federal election campaign.

A federal court found Palmer infringing the copyright on the music and literary works of Twisted Sister’s original track, $ 500,000 as an “assumed license fee” and 1 million as additional “substantial” damages. I ordered you to pay the dollar.

Palmer was also ordered to delete his parody song online, hand over all unauthorized copies of the song to Universal Music, and bear the legal costs of filing a proceeding against the plaintiff.

“By Mr. Palmer [the song] Judge Anna Katzman wrote at her discretion.

“He found political and personal benefits both in his infamy and popularity, and in the message it conveys, and thought he could stop using it by simply changing some of the words. “She said.

Businessmen first claimed that the song was a sneak peek at the Christmas carol “O Come, All Ye Faithful,” and then tried to protect themselves using fair use for parody and satire purposes. But justice ended the music, and the lyrics of these two songs “have a lot in common.”

Another amazing highlight from today’s court verdict @CliveFPalmer And agree @ Dee Snider And @ugm:
Palmer’s denial of copy was “unconventional, confronted with documents of the same period, and contradicted the evidence of his own witnesses.” – – [197]

Palmer contacted Universal Music in 2018 about obtaining a license to use a re-recorded version of the original track with some changes to the lyrics, but abandoned subsequent efforts. Round of negotiations..

Palmer issued a brief statement on the decision, stating that his legal team would consider an appeal.