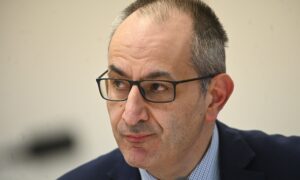 Australia’s chief domestic security minister has severely warned that the country is strong and ready, saying that the “drum of war” is hitting the region.

Anzac Day Secretary of the Interior Mike Petzullo commented in a message to department staff. He spoke of a speech given by US General Douglas MacArthur and Dwight D. Eisenhower.

“Through his presidency, Eisenhower instilled in the free state the belief that he must be armed, strong and ready for war, even if he laments the curse of war, as long as the tyranny threat to freedom continues. ” Petzullo wrote..

“Today, free nations continue to face this dire challenge,” he added. “In a world of constant tension and horror, the drums of war beat. Sometimes slightly far, sometimes bigger, and closer than ever.”

“War may be stupid, but the greater stupidity is to keep the curse away by refusing to pay attention and thought, as if war left us and probably forgot us. is.”

Interior Minister Karen Andrews, a senior of Petzullo, said the comprehensive message from the government was “alert, but not vigilant.”

“It’s clear that the government is very conscious of what’s happening, especially in the Pacific region, and it always puts Australia first, second and third,” she told Nine News on Tuesday.

Foreign Minister Marise Payne said the government’s focus was on “avoidance of conflict.”

“Our aim is to ensure a stable, safe, prosperous and open Indo-Pacific,” she told reporters.

“By all means, we have to stand up for trade and for human rights, but I think words like’war drums’ are pretty exciting words,” he told Nine News. It was.

“I don’t know if our senior civil servants should use that language, because we don’t know what it really helps, except to cause anxiety.”

Petzullo’s comment came a few days after Defense Minister Peter Dutton said the conflict around Taiwan could not be ruled out.

“People need to be realistic about their activities,” Dutton told ABC on Sunday. “There is militaryization of bases throughout the region. Obviously there is a fair amount of activity and there is hostility between Taiwan and China.”

Admiral Philip Davidson of the U.S. Indo-Pacific Army said that as Beijing’s military buildup progressed, the Chinese Communist Party (CCP) could try to invade Taiwan in the “next six years.” Analysts believe the period could be shorter.

Beijing considers Taiwan its own territory, even though the island nation has been governed as a separate territory for over 70 years. The Communist regime has vowed to force it to fold as needed.

The Taiwanese government has stepped up its own weapons acquisition and production programs, including long-range missile production that allows Taiwan to penetrate deep into China’s territory in the event of a conflict.