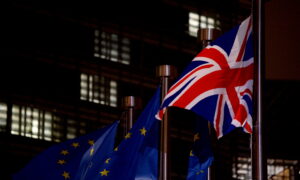 The bloc has sent a letter of formal notice to kick-start an “infringement procedure”, which could lead to fines being imposed by the EU’s top court, although that could be at least a year off, leaving time for a solution to be found.

Britain’s withdrawal agreement with the EU leaves the British-ruled province of Northern Ireland in the EU single market for goods and so requires checks on goods arriving there from other parts of the United Kingdom.

Some of those checks are meant to start when a grace period expires at the end of March. The plans have already disrupted some supplies reaching supermarkets in Northern Ireland.

Britain says it intends to extend the grace period unilaterally until Oct. 1, a decision the EU letter demands it reverses.

The United States called on both sides to preserve the Good Friday accord protecting peace in Northern Ireland, with the White House urging them to “prioritise pragmatic solutions”.

Maros Sefcovic, the top EU official in charge of UK relations, has sent a separate letter to British counterpart David Frost, seeking talks in good faith to resolve the issue this month.

Britain says it has not violated the agreement.

Prime Minister Boris Johnson said on Monday the extension was simply a technical decision aimed at being fair. The protocol, he said, should guarantee trade between Britain and Northern Ireland, as well as across Northern Ireland’s land border with Ireland.

“That’s all we’re trying to sort out with some temporary and technical measures which we think are very sensible, but obviously we’ll look forward to our discussions with our EU friends and see where we get to,” he said.