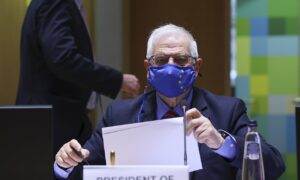 BRUSSELS—The European Union and the United States imposed sanctions Monday on a number of Burmese officials accused of involvement in the country’s military coup and the ensuing crackdown on protesters.

The EU announced penalties on 11 officials, including 10 top military officers. Most had already been sanctioned by the United States. The Biden administration, meanwhile, targeted two senior officials, including the national police chief, and two military units involved in the suppression of protests.

Ten of the 11 targeted with asset freezes and travel bans by the EU are senior members of the Myanmar Armed Forces. They include Commander-in-Chief Min Aung Hlaing and Deputy-Commander-in-Chief Soe Win, the bloc’s headquarters said in a statement. The eleventh person hit with sanctions is the head of the election commission who canceled last year’s vote.

In a separate but coordinated action, the State and Treasury departments hit chief of police, Than Hlaing, and the commander of the Bureau of Special Operations, Lt Gen Aung Soe with sanctions along with two military units. “These designations show that this violence will not go unanswered,” the State Department said.

Burma’s military junta prevented Parliament from convening on Feb. 1. It claimed that last November’s elections, won by Aung San Suu Kyi’s party in a landslide, were tainted by fraud. The election commission that confirmed the victory has since been replaced by the junta.

The coup reversed years of slow progress toward democracy in Burma, also known as Myanmar, after five decades of military rule. In the face of persistent strikes and protests against the takeover, the junta has responded with an increasingly violent crackdown and efforts to limit the information reaching the outside world.

Internet access has been severely restricted, private newspapers have been barred from publishing, and protesters, journalists and politicians have been arrested in large numbers.

The statement, issued during a meeting of EU foreign ministers, said the sanctions are part of the 27-nation bloc’s “robust response to the illegitimate over-throwing of the democratically-elected government and the brutal repression by the junta against peaceful protesters.”

Secretary of State Antony Blinken said of the designations demonstrate “the international community’s condemnation of the regime and commitment to the people of Burma.”

German Foreign Minister Heiko Maas said that “what we are seeing in the way of excesses of violence there is absolutely unacceptable; the number of killings has taken on intolerable dimensions.”

“We don’t want to punish the population in Myanmar with sanctions, but those who are blatantly violating human rights there,” Maas told reporters.