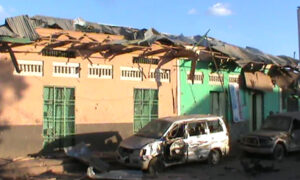 Officials reported that the bombers were targeting Ali Wardhair, the governor of the Bay region, outside the Suez Cafeteria. According to the official government news agency SONNA, the governor was unharmed and escaped the explosion. SONNA reported that at least two of his bodyguards, who were also police officers, were among the injured.

“The explosion heard throughout the town of Bai Dabo terrorized people and caused temporary confusion,” said Amin Maddy, who witnessed the explosion and spoke to the Associated Press on the phone.

Al-Qaeda-linked group al-Shabaab claimed responsibility through a report they published on their website and Radio Andalus in support of their jihadist campaign.

“The target was a convoy that accompanied Ali Wardhere, the governor of the Bay region, and was hit hard,” a statement by al-Shabaab said. I was injured. “

Police blocked the area for investigation as many bystanders gathered to see if family and friends were among the victims.

Meanwhile, police said another explosion in the Friwa district of Mogadishu on Saturday killed a government soldier and injured bystanders.

It is unclear if the two explosions of Baidoa and Mogadishu are related. No one has yet claimed responsibility for the bombing in Mogadishu.

Somali people are witnessing a serious security collapse as leaders continue to stagnate over the political situation after the elections were postponed earlier this year.

“The meeting between the federal government and federal member states was completely unsuccessful,” said Ottoman Avocal Dave, the Minister of Information, who blamed the two leaders of Puntland and Jubaland for the failure.

However, the leaders of Puntland and Jubaland denied reports of the failure of the meeting.

There was concern that al-Qaeda-linked groups could be bolded by Somalia’s current political crisis as President Mohammed Abdullah Mohammed is under pressure to resign.