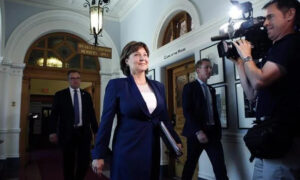 Vancouver — Former Prime Minister Christy Clark said in a survey of money laundering in British Columbia today that he first heard from sources within the government in 2015 about the suspicious surge in cash entering casinos.

Clark told the Karen Commission that the surge in reports could be followed by increased training for casino oversight staff, but worried that the problem was “clearly the best ever.” It was.

Clark testified that the government has acted swiftly to implement a 2011 report recommending changes to anti-money laundering strategies.

According to Clark, the government is concerned about guns, gangsters and money laundering and has taken significant action during its six years as a premier.

She says that confirming the effectiveness of their approach “is that the current government continues to do so.”

Clark is one of many former ministers on the Commission’s list of witnesses this month.

Attorney General David Eby has also been added to the list of witnesses.

The British Columbia Government appointed Judge Austin Karen of the Supreme Court in May 2019 to lead a public inquiry into money laundering.

The state granted the Commission an extension in March to prepare a final report, which is currently scheduled for December 15.