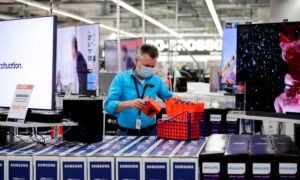 BERLIN—Coronavirus infections are rising exponentially in Germany, an expert at the Robert Koch Institute (RKI) for infectious diseases said on Tuesday, adding that the risk of AstraZeneca’s vaccine was relatively low.

“We are exactly on the flank of the third wave (of the COVID-19 pandemic). That can no longer be disputed. And at this point, we have eased the restrictions and that is speeding up the exponential growth,” Dirk Brockmann, an epidemiologist at RKI, told Germany’s ARD television.

Chancellor Angela Merkel and state leaders agreed to a phased easing of curbs earlier this month along with an “emergency brake” to let authorities reimpose restrictions if case numbers rise above 100 per 100,000 on three consecutive days.

On Monday, Germany suspended the use of AstraZeneca’s COVID-19 vaccine, making it the latest of several European countries to hit “pause” following reports of blood coagulation disorders in recipients.

The decision followed a recommendation from the Paul Ehrlich Institute (PEI), Germany’s authority in charge of vaccines, following seven cases of thrombosis, including three deaths.

A planned meeting between Merkel and state leaders on Wednesday to discuss using family doctors to administer COVID-19 vaccines has been postponed until after the European Medicines Agency completes its review into the AstraZeneca shot, a government spokesman said.

AstraZeneca has said an analysis of its safety data covering reported cases from over 17 million vaccine doses given had shown no evidence of an increased risk of pulmonary embolism, deep vein thrombosis, or thrombocytopenia–having low levels of platelets.

Brockmann said it made sense to explain the relative risks to the population, noting that 1,000 people in a million had died of COVID-19, compared to possibly 1 in a million from complications associated with the vaccine.

“In the risk groups, the risk of dying of COVID is much, much higher. That means it is probably 100,000 times more likely to die of COVID than because of an AstraZeneca vaccine,” he said.

By Emma Thomasson and Caroline Copley