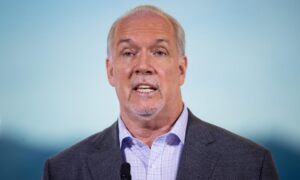 Victoria — British Columbia opposition acknowledges that the COVID-19 pandemic poses a major challenge to Prime Minister John Horgan’s government, but Monday’s throne speech was on the state’s economy, health, society, and environment. He states that he needs to outline a coherent plan for the future of British Columbia.

The speech is expected to set the government agenda following last year, which was dominated by COVID-19’s reconstruction efforts after winning the NDP elections last October.

“We look forward to Premier Hogan planning to address key issues that British Columbia residents are interested in,” Bond said in an interview. “It starts with a reaction to COVID-19 and what it looks like to move forward.”

She said the Liberal Party wants more support for SMEs rather than a complex and slow bailout program.

“It’s not enough to announce a one-time program across the state,” Bond said. “One of the themes that has emerged in this government is the lack of strategic planning.”

NDP house leader Mike Farnworth said the throne speech will focus on overcoming the pandemic and beyond BC.

“We want to put a pandemic behind us,” he said. “We want to reshape more strongly. We want to invest in people. We want to strengthen our community. We want to ensure that we can support business growth and employment.”

Fernworth said the budget would include details of government investment in communities and infrastructure, but the fight against the pandemic is paramount.

“Clearly important is to vaccinate British Columbia citizens,” Fernworth said. “The next few months will be important in that regard.”

Bond said the King’s speech needs to provide details on the government’s plans to create short-term and post-pandemic jobs and promote economic recovery.

“It’s time for the government to plan to address some of the critical issues facing British Columbia,” Bond said.

One of the serious problems facing the state is death from an ongoing opioid overdose, she said.

“Mental health support and the opioid crisis were in the midst of a crisis, and despite much discussion, little effective action was seen in that regard,” said Bond.

BC Coroners Services reported a record number of illicit opioid overdose deaths in 2020, which killed 1,716 people.

Adam Olsen, one of Congress’s two BC greens, said the party needed a majority to provide a stable government during the pandemic.NDP still provides a clear agenda since the fall elections. I said I didn’t.

“Most governments after being elected have a 100-day plan, which is very clear about what the next and first steps are for governments,” he said. “It’s really missing since November.”

The Olsen sisters are aware that the pandemic is inclusive of the government and said it needs to be addressed, but there are other problems facing the state, including the Site C Dam.

“We have Site C Dam, one of the largest projects in any government in the state and in the history of the country. This is clearly problematic,” Olsen said. Says.

Hogan said last month that hydroelectric dams faced “significant challenges” due to geoengineering issues and delays in the construction of COVID-19, increasing the estimated cost of the project to $ 16 billion and completing it by 2025. He said he would be a year late.

“We say the government is working on all of them, but there is no coherent plan,” Olsen said. “It’s very difficult to assess success when you don’t have that coherent plan you can see.”

Sister Olsen said the government has yet to present a vision for the future.

“I hope they don’t just use this throne speech to present their vision for British Columbia, launch a program in response, modify it on the fly, and claim success. . “