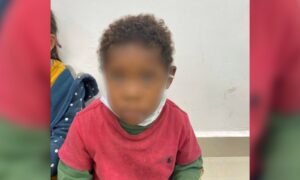 The Mexican government said Wednesday that a 4-year-old Honduras boy was found traveling alone near the Rio Grande River, which separates Mexico from the United States.

The National Institute of Immigration (INM) in Mexico said the boy was found to be unaccompanied in trees and bushes as he walked toward the border. He was near the long-stricken Mexican city of Reynosa, opposite McAllen, Texas.

According to INM, a group of three mothers and six children lived in the same area, but none of the adults were responsible for the boy and did not recognize him as a relative.

Immigrants and all Hondurans were detained when they found a group of women and children running or duckling to hide in grasslands and trees on elevated roads in the area, according to the Institute. It was.

The unnamed boy is one of the thousands of children who arrived at the border when arrivals surged since US President Joe Biden took office and revoked numerous immigration policies during the Trump era.

According to INM, consular authorities and the National Human Rights Commission of Korea were informed of the boy’s situation.

Ten migrants were placed under the control of a local branch of the Mexican authorities, which specializes in family welfare.

Mexican officials said human smugglers are recommending that children be taken on trips from Central America to make it easier for migrants to cross the border into the United States.