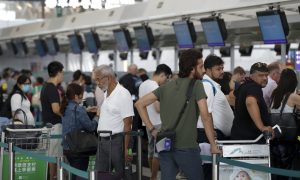 Hong Kong’s new National Security Act has changed the social climate of the region and created a new wave of immigrants.

According to the official Hong Kong census, 66,000 residents moved in 2020, most of them young and middle-aged. According to one survey, 84% of high-income earners are considering moving abroad.

According to the latest “General Household Survey” by the Hong Kong Census and Statistics Bureau, the “non-institutional population on land” is now 7,358,800 in the first quarter of 2021. The non-institutional population on land does not include people living in military, correctional, schools, college dormitories, religious facilities, or hospitals.

According to the Census and Statistics Bureau, young and middle-aged people were the main immigrants. Total male and female data for 2020 show that the largest decrease in proportion is in the age group of 15-24 years, with a 0.2% decrease. This was followed by the 25-39 and 45-49 age groups, both of which decreased by 0.1%. After the migration of parents, children under the age of 4 also decreased by 0.1%.

Bartra Wealth Advisor, an Irish investment immigration company in Hong Kong, conducted an online survey. Of the 1,200 respondents, most belonged to Hong Kong’s high-income groups, including corporate white-collar workers, businessmen, and other professionals. According to the survey results released on February 9, 32% of the respondents are considering moving abroad, 52% said they would consider it in the future, and only 16% said they would not. It was.

When asked about the time they plan to leave Hong Kong, 15% said they would leave Hong Kong within a year of getting an entry permit, and 85% said it would take more than two years. transition.

The survey also showed that the first countries or regions of choice for immigrants were the United Kingdom and Taiwan, followed by the United States, Australia, and Canada. The 12 countries that can be selected in the survey include Ireland, Germany, Thailand, Malaysia and Portugal.

According to an official update on June 18, the UK Home Office received a total of 34,300 applications in the first quarter of 2021. Of these, 20,600 were foreign applications, 13,700 were domestic applications, and 20,000 were major applications. It was a dependent.

At the same time, the UK Government has allowed Hong Kong residents with BN (O) status to live, study and work in the UK. [Immigration] Enter the Rules (LOTR) to apply for a BN (O) visa in the UK. The policy has been extended until July 19th.

In the first quarter of 2021, the UK Government provided LOTR for approximately 5,500 Hong Kong and BN (O) passport holders to enter the UK.

The UK government predicts that Hong Kong’s immigrants will continue to grow. According to national statistics, before the CCP enacted the National Security Act in July 2019, about 2.9 million people were BN (O) qualified, but have BN (O) passports. There were only 167,000 people. As of August 2020, the number of BN (O) passport holders surged to 612,000.

The UK Government will release the second quarter data on August 26, 2021.

As of March 31, this year, the number of temporary under-skilled visas has increased by 22.3 percent and temporary graduation visas have increased by 54 percent since the announcement of the new Hong Kong visa policy on July 9, 2020, according to the Australian Interior Ministry. did.

And from July 1, 2020 to March 31, 2021, the Australian Government provided protective visas to 138 Hong Kong passport holders.