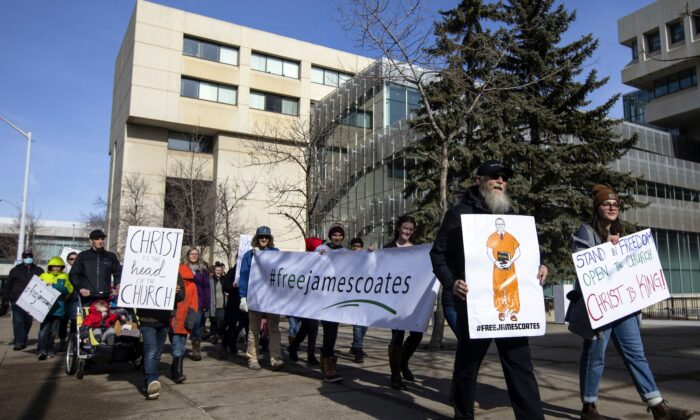 In a file photo of March 4, 2012, Rev. James Coates of the Grace Life Church has appealed bail conditions after being arrested in Edmonton for violating the COVID-19 rules and worshiping the church. Supporters are gathering outside the courtroom. (Canadian Press / Jason Franson)

Spruce Grove, Arta — Hundreds of people are gathering outside the church in Alberta, charged with refusing to comply with COVID-19 health rules.

On the first Sunday after the Grace Life Church was closed by Alberta Health Services and fenced, an estimated 500 people gathered outside to show their support and opposition to the COVID-19 regulation.

GraceLifeChurch and his minister, James Coates, have been charged with providing services that break health restrictions related to capacity, physical distance, and masking under public health laws.

Alberta’s health agency said the church would remain closed until a statement on Wednesday when it closed the church stated that it would comply with public health measures aimed at containing the spread of the virus. Stated.

Dozens of police officers sang hymns and watched a large crowd while praying for the reopening of the church.

Some supporters shouted to the police, saying they should be ashamed of the closure.

The RCMP said in a statement that it would only use the level of intervention necessary to maintain peace, order and security.