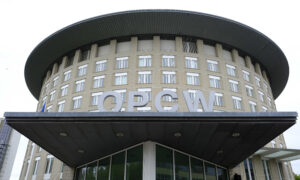 The Hague, The Netherlands — A study by a global chemical weapons surveillance agency “ believes” a military helicopter of the Syrian Air Force dropped a chlorine cylinder in a Syrian town in 2018, killing 12 chemical weapons bans. Reasons for it “was found. Said on monday.

This is the second time that the OPCW investigation and identification team has concluded that Syrian government forces are likely the cause of the gas attack. Last year, the team also found reasonable grounds for believing that the Syrian Arab Air Force was responsible for an attack using chlorine and nerve gas salin in the town of Rathamne in March 2017.

Syria has been repeatedly accused of using chemical weapons during the country’s fierce civil war. President Bashar Assad’s government has denied that claim.

In the latest report, the OPCW research team said a military helicopter belonging to the Syrian Air Force’s Tiger Force dropped at least one chlorine cylinder in the rebel-owned northern Syrian town of Sarakeb on February 4, 2018. He said he found evidence.

As part of the investigation, experts interviewed witnesses, analyzed samples and debris collected from the town, identified symptoms reported by casualties, studied satellite imagery, and modeled gas dispersion patterns. did.

OPCW cannot detain an individual who is criminally liable for an attack. The report will be shared with the member states of the organization and the United Nations. This report may be discussed at a meeting of OPCW member states later this month.

Josep Borrell, head of foreign policy in the European Union, has accused Syria of using chemical weapons and said he must be held accountable.

“It is now up to the international community to properly review the report and take appropriate action,” Borel said in a statement.

The research team was established after Russia blocked the expansion of the joint research mechanism established by the United Nations and OPCW in 2015. The team accused Syria of using chlorine in at least two attacks in 2014 and 2015 and releasing sarin in aerial attacks. Shaken Khan killed about 100 people in April 2017.