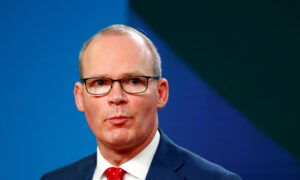 Ireland’s Foreign Minister Simon Coveney has described an effort by the UK to reach a trade deal with the United States ahead of the European Union as “perverse nationalism.”

“This idea that Britain can get there first is narrow-minded thinking, frankly. It’s a perverse nationalism when actually Britain and the EU should work together as partners,” he said in an interview with The Times of London on March 13.

Coveney described how UK Prime Minister Boris Johnson has “done quite a skilful job” in leading the UK through its Brexit deal, but that trust was vital for the UK in making trade deals outside of the EU.

Coveney advocated Britain working with the EU and Canada to reach a joint trade deal with the United States, although the EU does not currently have plans for a major U.S. trade deal.

“Rather than the EU and UK competing for attention in Washington, looking to be first to do a trade deal, it makes sense for UK, EU and US and Canada to do one together,” he said.

He also criticised Britain for unilaterally extending a grace period for checks on food imports to Northern Ireland until Oct 1. The EU on Monday responded to the move by launching legal action, saying the extension breaches the Brexit divorce deal.

UK Foreign Secretary Dominic Raab had previously said that the action the UK had taken was “lawful” and “targeted.”

“It’s just to make sure that the commitment to preserve the integrity of trade in the internal market is properly respected,” Raab told a news conference in Tallinn on March 11.

Brandon Lewis, UK’s Northern Ireland secretary, said in an interview with Northern Ireland’s News Letter newspaper on March 13 that the grace period is to be used to work out a permanent solution.

“My position and the government’s position in terms of the grace period we’ve got for chilled meats at the moment is not that at the end of that grace period there is a cliff edge; it’s that we use the grace period to get a permanent solution to ensure that those products can continue to flow,” Lewis said.

The United States on Monday called on the UK and EU to preserve the Good Friday accord protecting peace in Northern Ireland, with the White House urging them to “prioritise pragmatic solutions”.

On Wednesday, St. Patrick’s Day, President Joe Biden will host the Taoiseach of Ireland, Micheál Martin, for a virtual bilateral meeting, the White House said in a statement. On the agenda is discussing “supporting political and economic stability in Northern Ireland.”