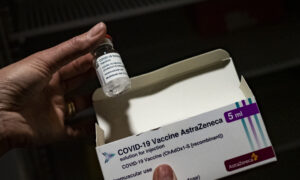 Italian officials have begun a manslaughter investigation following the death of a 57-year-old music teacher hours after receiving AstraZeneca’s COVID-19 vaccine, according to local media reports.

Officials have so far said there is no evidence of a direct link between the man’s death and his shot.

Prosecutors in the northern Italian region of Piedmont announced they opened a manslaughter probe into the death of Sandro Tognatti, who received the vaccine in his hometown of Biella on March 13. His wife told news outlets that he went to bed that night with a high fever. The next day, she said, an ambulance was called for him, and he later died.

The local prosecutor in Biella, where Tognatti lived, announced the opening of a criminal case for manslaughter after his death, Italy’s La Repubblica newspaper reported.

Teresa Angela Camelio, the prosecutor, announced that the move “follow[s] the decision of the Piedmont Region to suspend ‘momentarily’ the administration of the AstraZeneca vaccine included in batch ABV5811, pending the decisions of the judicial authority and the drug supervisory commission.”

Camelio said that an autopsy regarding Tognatti’s cause and manner of death has been scheduled for this week.

Italian wire service Agenzia Nazionale Stampa Associata (ANSA) also reported on the manslaughter probe announcement. Batches of the vaccine were seized in Piedmont on March 15 as a precaution, Camelio confirmed to La Repubblica.

British drug regulators and AstraZeneca officials have said there is no link between the Oxford University-developed vaccine and a higher instance of blood clots.

In a statement to The Epoch Times on March 15, an AstraZeneca spokesman said that the pharmaceutical giant is “working with national health authorities and European officials and look forward to their assessment later this week.”

“Around 17 million people in the EU and UK have now received our vaccine, and the number of cases of blood clots reported in this group is lower than the hundreds of cases that would be expected among the general population,” AstraZeneca stated.

Both the European Medicines Agency and the World Health Organization (WHO) asserted last week there is no evidence the vaccine is causing clots.

Authorities from the European Medicines Agency said that “there is currently no indication that vaccination causes these conditions,” while stating that “the vaccine’s benefits continue to outweigh its risks and the vaccine can continue to be administered.”

Italy, Germany, France, Spain, and a number of other European nations have suspended usage of the AstraZeneca shot in the wake of unusual or adverse reactions that were reported among recipients.  On March 16, Sweden became the latest country to join the list of countries to suspend usage.

German officials said the European Medicines Agency was expected to make a decision this week on whether the new information will affect the authorization and rollout of the AstraZeneca shot.

Officials in those countries have said there is no evidence the vaccine caused the blood clots, adding that the clots occurred after the shot was administered.

Dr. Phil Bryan, the chief of vaccine safety with the UK Medicines and Healthcare products Regulatory Agency (MHRA), told the BBC that “we are closely reviewing reports but given the large number of [AstraZeneca] doses administered, and the frequency at which blood clots can occur naturally, the evidence available does not suggest the vaccine is the cause.”

Tognatti’s death came just days after a 60-year-old Danish woman suffered highly “unusual symptoms” and died after receiving the vaccine, the Danish Medicines Agency said this week. The woman had a low number of blood platelets and clots in small and large vessels, as well as bleeding, it said, reported Reuters.

“It was an unusual course of illness around the death that made the Danish Medicines Agency react,” it said in a statement late on March 14.

Norway said on March 13 that three people, all under the age of 50, who had received the AstraZeneca vaccine were being treated in hospital for bleeding, blood clots, and a low count of blood platelets, which were labeled “unusual symptoms” by health authorities.