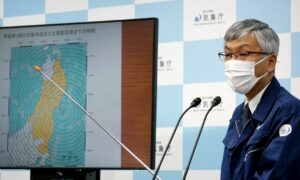 The Tokyo-Magnitude 6.8 earthquake was revised from a previous estimate of 6.6 and struck northeastern Japan on Saturday, shaking buildings 400 km away in Tokyo, increasing the likelihood of a landslide near the epicenter.

Although no serious injuries were reported from the earthquake, the Japan Meteorological Agency warned of the possibility of a strong aftershock for about a week and an increased risk of landslides.

TEPCO had no problem with the Fukushima Daiichi Nuclear Power Station, which was damaged by the 2011 off the Pacific coast of Tohoku Earthquake, and was located about 105 kilometers away from the epicenter of the earthquake on Saturday. I reported that there is. Similarly, there was no problem at the Fukushima Daini Nuclear Power Station, which is just south of the wrecked plant.

According to the operator Tohoku Electric Power, there was no problem at the Onagawa Nuclear Power Station near the epicenter.

The Shinkansen throughout northern Japan stopped for several hours, but resumed until late in the afternoon.

ENEOS Holdings, Japan’s largest refinery, said the Sendai refinery near the epicenter was automatically closed in the wake of the earthquake. The engineer said he was checking after confirming that he was not injured.

The 145,000 barrels of refinery per day was reopened in April after being damaged by the February earthquake. The quake knocked out one-fifth of Japan’s refining capacity.