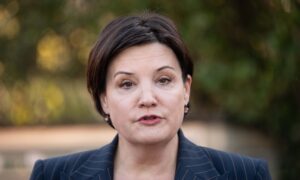 McKay said at a tears press conference on Friday that he would resign despite “my caucuses and great caucuses”.

The leader of the Labor Party in New South Wales, who won the top spot in 2019, said he was the elected leader, but that some people in the party never “accepted the results.”

“Once new leaders are decided, we must accept the results, support them, and strive to win the government in 2023, because NSW deserves more.”

Today, I have resigned as leader of the Labor Party in New South Wales. I am doing it with a very heavy heart. No one asked me to stand aside. Once new leaders are decided, we must accept the results, support them and strive to win the government in 2023. #nswpol

Her leadership position was under pressure after the Labor primary fell from 29 percent to 21 percent in 2019 in last week’s upper hunter by-elections.

As a result, she gave her colleague 48 hours to compete for leadership, but no one was at the time.

She then, with the support of her colleagues, claimed that the two frontbenchers would remain leaders despite resigning from the Shadow Cabinet. The two frontbenchers, transport spokesmen and potential Leadership challenger Chris Minns and shadow finance officer Walt Secord.

In his resignation, Minds stated that neither McKay nor Catley had contacted him within 24 hours of the document leak.

Secord resigned after McKay told reporters he knew nothing about the so-called “dirt dossier.” She then emphasized this further during an interview with Sky News.

The staff has been fired and the content of the paperwork is unknown to the Epoch Times.

At the time, Mins wasn’t openly challenging McKay’s leadership and said he needed to talk to a colleague on Wednesday.

Instead, McKay stood aside on Friday afternoon, likely paving the way for Mins to take the lead.

“Leadership is mostly about the organization and how to deal with success and difficulty,” McKay said Friday.

After losing the Caucus in the 2019 election, McKay defeated Mins as Labor Party leader candidate.

The NSW Labor Department did not immediately respond to requests for comment.