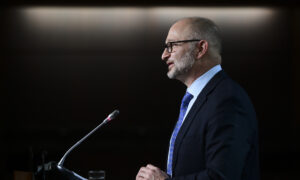 Justice Minister David Lametti on Wednesday pushed for Parliament’s second reading of a bill that would remove mandatory minimum penalties for all drugs and several gun-related crimes.

In February, the Liberal government introduced Bill C-22, which seeks to amend the Criminal Code and the Controlled Drugs and Substances Act (CDSA) to repeal mandatory minimum penalties (MMPs) for all drug offences and several gun-related crimes.

Under the Canadian Criminal Code, when an offence is punishable by the mandatory minimum penalty (MMP), a judge is required to give a sentence that is equal to or greater than the minimum term for that offence.

If passed into law, Bill C-22 would give judges discretion in sentencing.

For offences such as possession of illegal drugs, judges would be required to consider measures other than imprisonment, such as addiction treatment programs.

On Wednesday, Lametti told the House of Commons that by eliminating these MMPs, Bill C-22 would be able to “restore judicial discretion, reduce the time and money spent on needless litigation, and address systemic barriers to equality.”

He also criticized the former Conservative government for its alleged reliance on incarceration for “less serious non-violation crimes.”

“Previous Conservative governments would have us believe our communities are safest when we put all criminals behind bars and throw away the key,” Lametti said. “But that is simply not supported by the evidence.”

Lametti argued that prison services would encourage recidivism among lower-risk and first-time offenders. He said alternative conditional sentencing, which allows offenders to keep their jobs and family life, are a better way to “enable more effective rehabilitation and reintegration.”

Members of the opposition criticized Lametti, saying he was not being transparent about the real impacts of the legislative reform.

Conservative MP Rob Moore said Bill C-22 would eliminate mandatory prison time for drug traffickers, and for the production of harmful drugs such as heroin, cocaine, fentanyl, and crystal meth.

Moore said gun-related crimes, which the Justice minister referred to as minor offences, would deserve mandatory prison time in the eyes of most Canadians.

“I think most Canadians would be alarmed by the approach the government is taking,” he said.