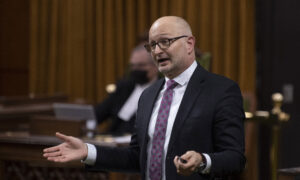 Ottawa — The Commonwealth Liberal Party has used an unpopular tool to limit the time of debate in the House of Commons on a bill that harmonizes Canadian law with the UN Declaration on the Rights of Indigenous Peoples.

The Liberal Party has successfully passed a motion to impose a closure on the first debate on Bill C-15 in order to vote on Bill C-15 and move it to the Commons Commission for further scrutiny.

The minority Liberal government received NDP support to pass a deadline motion. This allows for an additional day of discussion before being sent to the committee.

Conservatives and Congressman Brock voted against limiting discussions on the bill.

Justice Minister David Lametti has accused conservatives of using “extended tactics” to stall the laws of all Liberal governments.

He emphasized that the purpose of the time allocation movement is to ensure the swift passage of the bill.

“These discussions take place in the House of Commons and continue with all forms of indigenous leaders throughout Canada,” said Rametti.

“This is a positive approach. It has been postponed for a long time. Isn’t this bill surprising? It’s time to do our best as a member of parliament to move it forward.”

The move raises concerns that indigenous leaders may never pass all legislatures before the election if the bill was stalled in its second reading since it was introduced in December. It happens only two days after the statement.

C-15 is the third attempt to get Congress to approve the implementation of the UN Declaration in Canada.

Former NDPMP Romeo Saga Nash has submitted two legislative legislation to implement UNDRIP. The first bill was defeated in a second reading at the Commons in 2014, and the second bill stalled in the Senate shortly before the 2019 elections.

This time, the Liberal Party essentially turned the Saganache bill into a government bill.

The United Nations Declaration, approved by Canada in 2010, confirms indigenous peoples’ right to self-determination and their rights to language, culture and traditional lands.

The bill does not include a definition of consent, raising opposition from conservatives who fear it gives indigenous peoples the right to veto natural resource development projects.