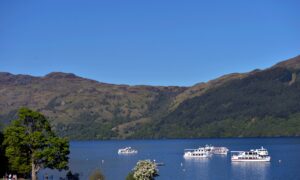 A man, a woman, and a child have died, and a seven-year-old boy is fighting for his life after having trouble underwater.

Scottish police said Saturday evening they were asked to report concerns to people in the waters near the pulpit rocks of Loch Lomond, south of Ardlui.

The 7-year-old boy was taken by ambulance to the Royal Children’s Hospital in Glasgow and is currently in the intensive care unit.

A Scottish police statement said he received the call on Saturday at around 6:40 pm.

He added: “Operations by multiple agencies have been carried out, and sadly three people have been sentenced to death on the scene.

“We haven’t been officially identified yet, but we’ve noticed a family of a 41-year-old man, a 29-year-old woman, and a 9-year-old boy.”

The case report will be sent to the prosecutor.

This brings the number of people who died in Scotland after a water accident to five in just 24 hours.

The 11-year-old boy was sentenced to death on the scene Saturday afternoon after being found in the river at Alexander Hamilton Memorial Park in Stonehouse, South Lanarkshire.

A 16-year-old boy died Friday in the water at Baroque Country Park on the southern tip of Loch Lomond.