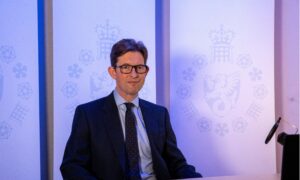 Ken McCallum said plans by CEO Mark Zuckerberg would allow terrorists to plan attacks invisible to security services. In an interview with Times Radio, McCallum said he wasn’t trying to build a “surveillance state” with “cameras in everyone’s living room.”

However, he said there were “rare” opportunities where it was essential to take appropriate precautions and access the content of the messages exchanged by the dangerous suspects.

McCallum said the decisions made by Silicon Valley executives have a direct impact on the ability of security services to thwart the activities of terrorists and the circle of child sexual abuse.

He said he could apply for a warrant to the interior minister and senior judge if he had the information that someone was making a bomb or filming a martyrdom video in their living room.

“Then you can access the room to see if the bomb was actually made, and we need to have that ability online,” he said.

“If you are using the end-to-end default encryption and there is no way to completely unwrap that encryption, then in effect terrorists and those who are organizing child sexual abuse online, ours. Giving to rare people, such as some of the worst people in society. Free passes they know that no one can see what they are doing in their private living room.

“This is an open issue and requires proper attention. We are not asking for any form of surveillance.

“What we need is when the Secretary of State and the judge agree that access to that information is necessary and proportional in rare cases where there is a very large proportion of concerns. In rare cases, we need a company to build a means for us to work with them to access the content of those communications. “