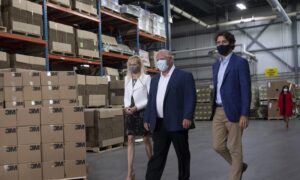 Odawa — The Federal and Ontario governments are welcoming the first N95 mask to roll off domestic assembly lines as a step towards strengthening Canada’s current and future pandemic protection.

The masks are being produced by 3M Canada following a multi-million dollar deal between Ottawa and Queen’s Park announced by Justin Trudeau and Premier Doug Ford last August.

Under the agreement, two levels of government have raised $ 23.3 million each to help 3M expand production at its plant in Blockville, about an hour south of Ottawa.

The two leaders said at the time that they aimed to ensure that Canada would never be at the mercy of an unreliable foreign supplier of personal protective equipment.

Federal Procurement Minister Anita Anand emphasized its purpose during a virtual event where the state minister marked the delivery of the first mask. This is currently aimed at frontline workers.

The agreement will deliver 30 million masks to the federal government and 25 million to Ontario each year for the next five years.

“From a federal perspective, our goal in closing this deal was to ensure the supply of PPE in Canada in the short and long term,” said Anand.

“These are the masks that Canada’s civilians and front-line healthcare professionals will need over the coming months and years, given that they don’t know if another pandemic will occur in this country, not just today. is.”

The new mask will appear when the third wave of COVID-19 dominates the country, sooner than Canadians get the vaccine.

“Obviously, this is an important kit in the fight against this virus,” Collins said in an interview.

“Because we need these masks, they will be displayed for a very long time, so we should be very grateful for this guarantee in the future.”

Collins also added that domestic production of the vaccine would also be noteworthy. “Especially now there is this very aggressive third wave.”