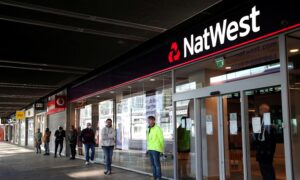 LONDON—Criminal money laundering charges against British state-backed bank NatWest are linked to a separate case against 13 individuals based in cities across the country, prosecutors have told Reuters.

Britain’s financial regulator, the UK Financial Conduct Authority (FCA), started a criminal action against NatWest on Tuesday, making it the first bank to be charged under a 2007 money laundering law.

The FCA accused NatWest of failing to monitor suspect activity by a client that deposited about £365 million ($506 million) in its accounts over five years, of which £264 million ($366 million) was in cash.

The Crown Prosecution Service (CPS) said in a statement to Reuters on Thursday that the FCA’s proceedings against NatWest involved the same accounts linked to the 13 individuals it has charged separately with money laundering offences.

Reuters and other media reported on Tuesday that Fowler Oldfield, a gold dealership in Bradford that has since been liquidated, was the NatWest customer linked to the FCA action.

Among the individuals the CPS has charged are former gold dealer James Stunt, who gained notoriety in the British press for his lavish lifestyle before going bankrupt, and two former Fowler Oldfield directors, Gregory Frankel and Daniel Rawson.

NatWest said on Tuesday it took preventing money laundering “extremely seriously” and was cooperating with the FCA investigation. If convicted, it could face an unlimited fine.

Fowler Oldfield was shut down following a police raid in 2016 and its assets are being held by police, a liquidators’ report in December 2020 said.

It was raided by police at the same time as Fowler Oldfield, according to media reports.

NatWest representatives are due to appear in court in the FCA case next month. The CPS case is listed for trial in April next year.