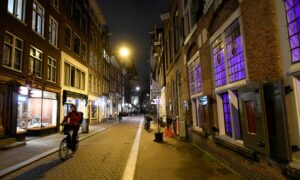 AMSTERDAM—Coronavirus cases in the Netherlands jumped by around 7,400 in the past 24 hours, marking the biggest increase since early January, Dutch Justice minister Ferd Grapperhaus told the national news agency ANP on Friday.

Infections were around 20 percent higher on Friday than a week earlier, while the number of COVID-19 patients in hospitals increased by 7 percent in the past week.

Dutch public health authorities have repeatedly warned about an imminent new wave of infections, due to the rise of new mutations of the virus.

On Tuesday they said that around 75 percent of all new cases were now of the variant first discovered in Britain late last year.

The big jump in infections comes just two days after Prime Minister Mark Rutte’s conservative party won general elections, in a result seen as an endorsement of his handling of the pandemic, despite a persistently high rate of infections and a slow rollout of vaccinations.

The Dutch government is set to decide in the coming days whether there is any room to ease a broad lockdown, which includes a nighttime curfew and the closure of all bars and restaurants in the country.