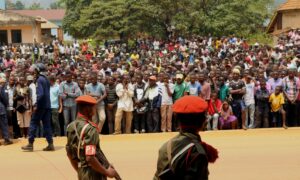 Beni, Democratic Republic of the Congo — According to witnesses, at least 10 people were killed overnight in a raid on the city of Beni in eastern Congo, and civil society groups and surveillance agencies suspect that Muslim terrorists are behind the attack. Said.

Residents said a group of attackers set fire to several homes in the city’s Beu district at midnight, firing when people left the building and attacking some with a machete.

The attack took place just four days after two blasts hit the city, home to thousands of refugees who fled the surrounding area due to violence, and authorities also accused Muslims.

Hundreds of people visited the city of Beni on Thursday morning to protest the government’s failure to protect the city. Some made makeshift barricades, others burned tires.

Protester Katembo Ngereza, who was awakened by shooting in the middle of the night after attending a party celebrating Congo’s Independence Day, said, “We have seen 10 of ourselves and have just carried the bodies to the morgue. “.

“I don’t know what the authorities are doing. The idea is to protect the inhabitants, but again … I’m really angry,” he added.

There was no immediate liability claim and the ADF could not be reached. ADF has been accused of killing thousands, primarily in remote areas, since 2014.

The army accused ADF of two explosions that hit Beni on Sunday, killing only the attackers. The mayor closed schools, churches and markets for 48 hours as a safety measure.

The government declared martial law in early May in two states bordering Uganda, North Kivu and Ituri, to mitigate the surge in violence.

However, the number of civilians killed in such attacks has increased since then, according to the Kivu Security Tracker, which maps eastern Congo’s anxieties.

The United Nations said in a report on Tuesday that there are about 700,000 internally displaced persons on Beni’s territory, of which 57,000 are in the city.