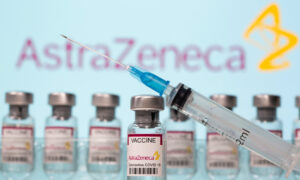 OSLO—Norway will delay its decision on whether to resume the use of AstraZeneca’s COVID-19 vaccine by up to three weeks, the Norwegian Institute of Public Health (FHI) said on Friday.

Authorities on March 11 suspended the rollout of the vaccine after a small number of younger inoculated people were hospitalized for a combination of blood clots, bleeding, and a low count of platelets, some of whom later died.

“We have decided to continue the pause and make a new decision by April 15,” FHI chief Camilla Stoltenberg told broadcaster NRK.

“We have started several processes to map out whether there is causality and to have a better basis to establish the real risk and a cost-benefit analysis for different age groups. To get more knowledge, it is necessary to have more time.”

Norway is one of over a dozen European countries to have suspended the rollout of the vaccine over safety concerns, although most nations have since resumed its use on the advice of the European Medicines Agency (EMA).

The shot remains on hold in neighboring Denmark however, while other Nordic countries have decided to use it for older age groups.

The EMA has said the shot’s benefits in protecting people from CCP virus-related death or hospitalization outweighed the possible risks. CCP (Chinese Communist Party) virus, commonly known as the novel coronavirus. The World Health Organization has also backed the vaccine.

AstraZeneca has said a review of safety data of more than 17 million people inoculated in the United Kingdom and European Union with its vaccine had shown no evidence of an increased risk of blood clots.

Norway has reported five cases in which recipients of the AstraZeneca vaccine were later admitted to hospital with the combination of blood clots, bleeding, and low platelets, three of whom have died.

A sixth person, who also got the vaccine, died from a brain hemorrhage in combination with a low count of platelets, health authorities have said.

Norway has been using vaccines developed by Pfizer/BioNTech and Moderna and hopes to use Johnson & Johnson’s once supplies become available in Europe.

The non-EU country is getting its vaccines via the European procurement program, thanks to Sweden buying more shots than it needs and then passing them on to its neighbor.

Norway has had some of Europe’s lowest rates of infections and deaths since the start of the pandemic early last year, but is now seeing a rapid increase in hospitalizations led by more contagious variants of the virus.

By Gwladys Fouche and Terje Solsvik