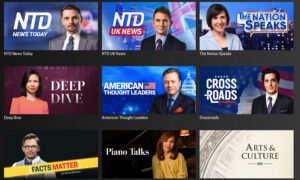 NTD television stations are expanding their recently established UK broadcast to a larger audience and are launching new channels on Freeview via Channelbox.

The station, a sister media of The Epoch Times, launched its first UK broadcast on Sky TV Channel 190 in February.

Founded by Chinese-Americans, NTD is proud to be a global multilingual American television station that covers stories not found in others without being influenced by the outside world.

“The arts and lifestyle program embodies universal values ​​and celebrates the best cultures and traditions of mankind,” the NTD said in a statement.

To access the Channelbox, the viewer must be able to connect to Freeview via a TV antenna and the Internet and be able to select channel 271.

The UK broadcast also includes a 30-minute daily news broadcast to the UK.