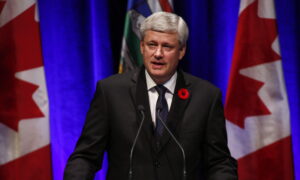 Ottawa — Top Tory leaders, past and present, talk to today’s supporters about what a conservative economic recovery from COVID-19 looks like.

Conservative leader Erin O’Toole will be one of the panelists at a conference hosted by Canada’s Strong and Free Network (formerly Manning Center).

According to the organizers, at least 500 people are enrolled to attend the think tank’s annual event and are billed as the largest gathering of both small-c and big-C conservatives.

The conference is held online and is set to feature discussions on how to “build correctly” rather than “build better”.

The latter is how Prime Minister Justin Trudeau explained his Liberal government’s plans to heal the Canadian economy from the sacrifices of the new coronavirus.

Former Conservative Prime Minister Stephen Harper joins the panel of former British Prime Minister David Cameron, but the organizers say it is off-limits to the media.