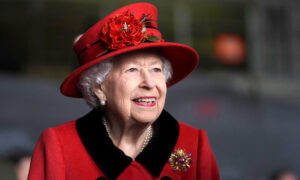 The portrait of the Queen has been removed from the Oxford University lounge because the monarch represents “recent colonial history.”

Political website Guido Forks On Thursday, a student committee at the Middle Common Room (MCR) at Magdalen College, Oxford University reported that it had voted to remove the portrait of Queen Elizabeth II with a “significant” margin. It represents the history of the recent colonial era. “

The report quoted the minutes of the meeting, some students argued that “patriotism and colonialism are in fact inseparable,” and the proposal “welcomes people” rather than “cancelling” the queen. Another student said, “In effect,” canceling “and” waving the Queen and her as a symbol of colonialism “damages the reputation of the university and its students and does not respect the cultural heritage of all nations. The room “cannot be claimed to be inclusive.”

Secretary of Education Gavin Williamson said the removal of portraits was “simply ridiculous.”

“She is the head of state and a symbol of Britain’s goodness. During her long reign, she has worked tirelessly to spread the British values ​​of tolerance, inclusiveness and respect around the world. “

With the string TweetDinah Rose, President of Magdalen College, said MCR is a student body that makes its own decisions and is not representative of the university.

“The common room is an organization of graduate students. They do not represent the university,” she wrote.

“A few years ago, around 2013, they printed a picture of the Queen and displayed it in their common room. They recently voted to withdraw it. Both of these decisions were made by the university. It’s not a decision, it’s their own decision.

“Maybe they will vote to raise it again, and they won’t. In the meantime, the photos will be kept safe.”

Mr Rose said college officials had received “obscene and threatening messages” after the story was reported.

“Being a student isn’t just about studying. It’s about exploring and discussing ideas. Sometimes it provokes older generations. It doesn’t seem that difficult to do these days.” She is writing

“So if you’re currently sending obscene and threatening messages to college staff, you might consider stopping and asking yourself if it’s the best way to show respect for the Queen. Or whether she is likely to support the tradition of free debate and democratic decision-making that we maintain at Magdalen. “

Asked to comment on the case, Housing, Community, and Local Government Secretary Robert Jenrick is a fan of the self-proclaimed Queen who has her portrait in her office and told the BBC “She to anyone. “I don’t want you to downplay it.” He said, “I’m ignorant like this.”