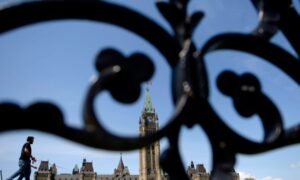 OTTAWA—The federal government says it ran a budgetary deficit of $268.2 billion through 10 months of its fiscal year as the treasury pumped out more pandemic aid.

The deficit from April to January compares to a deficit of $10.6 billion over the same period one year earlier.

The government says in its monthly fiscal monitor that the deep slide in the deficit reflects the unprecedented deterioration in the economy and the government’s spending response to the COVID-19 pandemic.

Program spending, excluding net actuarial losses, ran up to nearly $474 billion between April and January, a $216.3-billion increase from the $257.7 billion one year earlier.

At the same time, revenues were $235.8 billion, a $40.5-billion drop from the same period one year earlier, as tax revenues and EI premiums decreased, and Crown corporations reported lower profits.

At the end of January, net federal debt was just under $1.09 trillion.