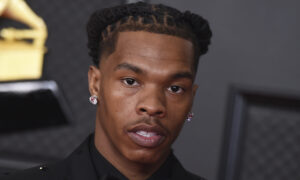 Thursday’s arrest of Lil Baby along one of the most exclusive streets in the French capital shocked both famous American fans in town for Paris Fashion Week.

After his release, a Grammy-nominated rapper from Atlanta posted “I’m Good” on Instagram, stating that he was back in the United States.

According to French police officials, the strong smell of cannabis was coming out of the car, and plainclothes police stopped Harden, Lil Baby, and his bodyguards.

Officials said Lil Baby, whose real name is Dominique Jones, initially refused to allow police to check the car. The situation was tense because the Americans didn’t understand what was happening. According to officials, a uniformed police officer arrived, searched the car and found 32 grams of cannabis.

According to prosecutors, Lil Baby and bodyguards were detained on suspicion of drug transport, fined and released on Friday morning.

A video of the incident shared online shows a plainclothes police officer doing a physical examination of Harden, who appears confused while holding a cell phone.

Students in the area explained that they saw the turmoil on a normally quiet street lined with gorgeous boutiques. “I turned my head, and I couldn’t believe it, I saw Lil Baby and James Harden … they were standing and undergoing a physical examination,” witness Lance Avrahampena said. Told.

The language seemed to be causing the problem, and police didn’t recognize the two Americans, Pena, who shot part of the scene, said.

Lil Baby’s representative did not respond to a request for comment.

Harden, meanwhile, posted photos online shortly before his two friends were arrested in various parts of Paris, but hasn’t commented publicly since the incident.

Harden, the 2018 NBA Most Valuable Player, played for the Houston Rockets before joining the net this season. He briefly promised to play with the U.S. men’s national team at the Tokyo Olympics later this month, but since then the hamstring injuries that have affected him during the NBA Playoffs have told the national team that he cannot participate. Told.