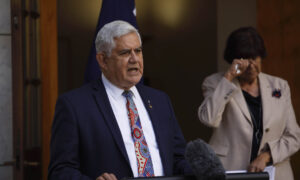 Report release As of June 30, last year, one in 18 indigenous children (18,900) had out-of-home childcare, according to an article titled “Child protection Australia 2019–20” by the Australian Institute of Health and Welfare (AIHW). I was receiving service.

This is 11 times more than non-Indigenous children, or 1 in 6 children.

Indigenous Affairs Minister Ken Wyatt told The Epoch Times in a statement on May 18 that the new numbers reinforce how important it is to work under a national agreement to fill the gap.

The framework for closing the gap aims to reduce the disadvantages of indigenous peoples.

“This underscores the importance of working under Target 12, which means reducing overexpression of caring Aboriginal and Torres Strait Islanders children by 45%,” Wyatt said. Mr. says.

“It is very important to work closely with state and territorial governments, Aboriginal and Torres Strait Islanders, their communities and organizations to address the issues that cause children to be removed from their families.”

The most common type of abuse found to be experienced by indigenous children in 2019-20 was psychological abuse, 47% of the 14,300 demonstrations.

AIHW spokesman Dinesh Indraharan had reasonable reason to believe that the notice was investigated and that the child was abused, abused, or abused, ignored, or otherwise harmed. Demonstrate the case.

“This is a shame for the people,” Catherine Riddle, CEO of SNAICC, the national peak agency for indigenous children, told The Epoch Times on May 18.

“All federal governments and jurisdictions have signed updates to Closing the Gap, whose framework says” Investing in Community-Driven Solutions. ” The reason we say that is because the community understands what their own relationships are, what their own challenges are, and they see opportunities for change, “she said. It was.

Early intervention is when families and children need help to be strong and prosperous, but Riddle said there is a lack of investment in this area. She urged the government to act swiftly to invest in indigenous community-led services.

“Most of the funding associated with this is not directed to early intervention,” she said. “At this stage of its existence, it goes to non-indigenous organizations. Some money is pervading indigenous-led community-led organizations, but it’s not comparable to those big legacy services.”

Riddle is also concerned that only 52.4 percent of indigenous children on home care lived with indigenous caregivers.

“Our children are separated from their culture, which causes lifelong intergenerational harm,” Riddle said. Media release..

As of June 30, last year, 23,300 indigenous children had been ordered to be cared for and protected, AIHW reported.