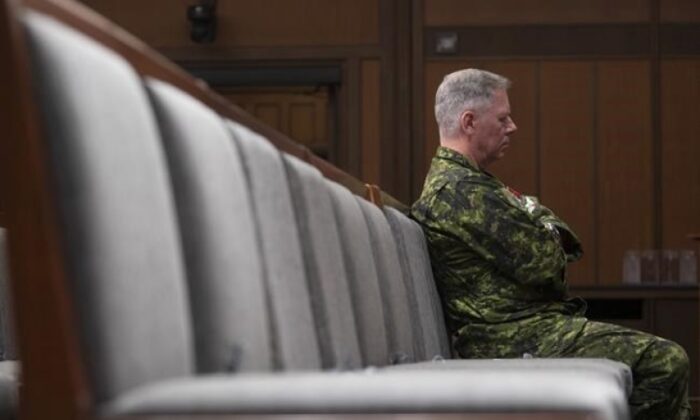 Chief of Defence Staff Jonathan Vance sits in the front row during a news conference, in Ottawa, on June 26, 2020. A civil servant who met with the former military ombudsman about sexual misconduct allegations against Canada’s former top military commander is reiterating she did not have enough information to take further action. (Adrian Wyld/The Canadian Press)

OTTAWA—A civil servant who met with the former military ombudsman about sexual misconduct allegations against then-defence chief Gen. Jonathan Vance is reiterating she had too little information to take further action.

Janine Sherman, a senior official in the Privy Council Office, says a sit-down with ex-ombudsman Gary Walbourne in 2018 yielded little information, as Walbourne sought to respect the complainant’s request of confidentiality.

In a parliamentary committee hearing today, Sherman says she exchanged emails with “people in the Prime Minister’s Office” about an allegation against Vance, though she declined to name them, citing non-disclosure rules around staff who are not public servants.

Trudeau has said his office knew concerns about Vance had been raised, but that he only became aware of the specific allegations through recent reporting done by Global News.

The former ombudsman maintains his only option was to bring the allegation to Defence Minister Harjit Sajjan but the minister, concerned about political interference, referred the matter to the Privy Council Office—the department that supports the prime minister and cabinet.

The Canadian Forces National Investigation Service is now investigating Vance following a Global News report last month alleging the former chief of the defence staff had an ongoing relationship with a subordinate starting in 2001 and continuing after he was named to the top post in 2015.