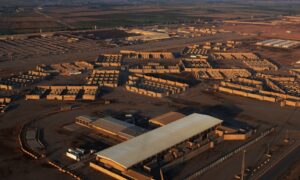 According to Iraqi troops, the rocket landed on a fence outside the base.

Initial investigations showed attacks aimed at attacking the Faq Would Air Force Base north of Baghdad, but rockets were scarce and attacked the village of Albuashi in the southeast, security officials said.

The last attack on Ballad Air Force Base was on March 15, when at least five rockets collided with the base.

No group claimed an immediate attack, but armed groups, who said some Iraqi officials were backed by Iran, claimed similar cases in the past.

US officials have accused Iran-backed militias of regular rocket attacks on US facilities in Iraq, including near the US embassy in Baghdad.

Paramilitary organizations in Iran have called for all foreign troops, including the US military, which has about 2,500 in Iraq, to ​​call their presence a profession and leave the country.

The US-led coalition, whose mission is to fight ISIS terrorists, remains stationed in Iraq, as does its NATO-led mission to train Iraqi security forces.